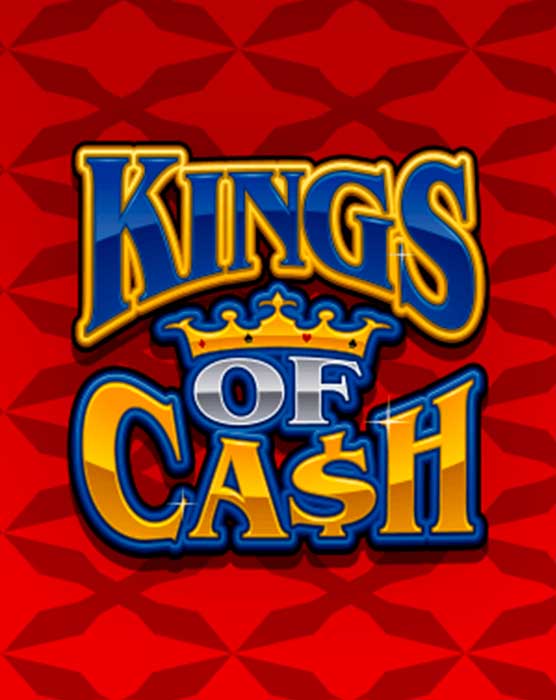 Kings of Cash by one of the most recognized and popular casino software providers, Microgaming, is a venturesome mixture of card and reel games. On the one hand, it’s a classic pack of cards with kings' funny and brilliant icons. On the other hand, it’s a full-story slot machine. All symbols of the game have their role in the plot and, hence, own some value. No extra symbol is added simply to enlarge this list. The result is fascinating: simple yet appealing animation grabs attention during the spins and does not let go until the reels stop spinning.

An attractive interface is not the only strong point of the Kings of Cash slot. The designers equipped it with not one but two bonus features of different types. A separate symbol triggers each prize game. No matter what prize round the player enters, a spins' bonus, or 12-card guessing round, he gains great winning. Thanks to the high RTP level, there is almost no chance to leave the game with an empty balance.

Quality animation and entertaining scenarios of bonus rounds are two out of three main characteristics of this game. The betting range is one more point to consider. The slot has 15 paylines, and this number is never to change. The player needs to select the size bet only, considering this fact, and spin the reels chasing good wins. How to Play Kings of Cash

Kings of Cash slot has a colorful and intuitive interface that allows the gambler to enjoy playing and efficiently run the game. The central part of the screen is the field with five reels and three lines filled with symbols. The designers from Microgaming decided to create the plot based on the topic symbols only. It means the players will not find any regular symbols of cards or alphabet that usually have low cost. This slot machine has eight symbols in total.

Each symbol, apart from the Wild with double sequences, provides money to the player when only completing a combination of three of the same kind or more. The best win comes when five of a kind appear. The Wild symbol is there to complete the combination when one of the symbols is missed. The Scatter, which is not in the general list but is designed only to trigger bonus rounds, enhances the win minimum with a x2 multiplier to a total bet. Its max capacity is x1000.

After the gambler realizes what minimum win he can gain in the Kings of Cash, it’s time to set the bets and calculate what will happen if the bet size is more prominent. All the control buttons are located on the right side of the screen. The range of bets is vast: from 0.01 coins per line up to 150 coins in total. The slot machine always shows the total bet on all 15 paylines at once. There is a unique tumbler under the sign of stacked coins to set the bet. By moving it from left to right, the player can change the stake range.

When the bet is defined, and the symbols are ready to create the combinations, the player should spin the reels. There is an option of autoplay in case the player wants to sit comfortably. Then he has to put basic settings and ultimately enjoy the process of gambling. Winning combinations start from left to right. But this rule does not work for Scatter, as it’s free from any duties except triggering the free spins and bonus game.

Video slot Kings of Cash has not only a unique choice of symbols in the general plot, but it’s empowered by exclusive bonus symbols that trigger great winnings in the bonus rounds. Let’s take a look at those two bonus features and how much cash they give.

The symbol of the game, Kings of Cash, plays the role of Wild, which means it can replace any other symbol except Scatter. Wild has its value, so when appearing on the reels, it may create an independent combination and thus, bring a win. On the contrary to other symbols, it’s enough that there are only two such symbols in the combination.

It is one of the main symbols, a crown, the players hunt, as it’s a sign of the excellent win approaching. Three Scatters on the screen trigger a bonus game. Here is a field with turned-back 12 playing cards. The main goal is to match three kings.

The number of attempts is twelve. It means the gambler can open all cards on the field. The first three matched kings will define the win: from $4.80 to $60. The more crowns on the reels, the higher the multiplier for a total bet will become. Its minimal amount is x2-x100 for three crowns and up to x1000 for five of them.

Another bonus symbol is a sign of the golden dollar, a Cash Logo symbol. This time, the player will get access to Free Spins. Three Scatters trigger 10 free spins, and four Scatters – 15 spins and x5 amount of bet. The maximum number of five Scatters leads to 25 free spins with a x10 multiplier of a total bet. Scatters may appear on any positions on the reels to set off the bonus round. Once they appear again during active free spins, they will retrigger the prize round again.

Unlike Wild, none of the Scatters have their value. Their leading role is to trigger bonus rounds and award the player with exclusively massive multipliers and total wins.

Like most of Microgaming’s old slots, Kings of Cash has simplified gameplay. All the rules are in one section. The number of symbols is small, and the range of bets allows the player to change it after each spin and, thus, try different modes to hit the biggest winning. Here is how to make settings and spin the reels: one short video reveals the complete information.

Considering the date of release, 2009, the Kings of Cash slot stands aside from the typical card play slot machines of that time. The royal theme may not look innovative, reflecting the familiar plot. All symbols, such as kings icons, a chest with jewelry, a royal banner, and a throne, are well-designed and concern the main idea, nothing extra to distract from the game.

Its main advantages are frequent game payouts and plenty of bonuses. 2 bonus games reward the player with regular winnings and multipliers of a wide range. The idea of bonus rounds is a mixture of classic simple prize games and innovative decisions to add unique conditions to make the slot more entertaining.

Two types of Scatters instead of one is another feature that makes it stand out. Both trigger prizes. However, the Cash Logo symbol on the reels is a sign of free spins that every gambler likes so much. Minimum ten free rounds guarantee a win.

Despite the benefits above, some players may consider it to have a low betting range, which is a shortcoming of the game. The high rollers will not feel satisfied when placing bets in this slot. Maximum 150 coins and no chance to change their value. As a result, they may consider the winnings revealed with such bets to be small enough to be worth their attention. But the regular player will appreciate the following fact: no matter how many rounds were played, he will gain wins of different sizes.